You are here: Home / Drunk + Stoned / Driver Who Ran Down 4 Girl Scouts Was Huffing Fumes Before Crash 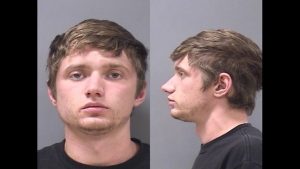 LAKE HALLIE, Wisconsin — A motorist who plowed through a Girl Scout troop as they collected trash from the side of a road, killing four people, had been huffing chemical fumes before the accident, police said.

Colten Treu, 21, and a passenger in his black pickup truck told cops that “they had been intentionally inhaling chemical vapors” — a pastime known as “huffing” — just before the accident Saturday morning.

Investigators say Treu had crossed the middle line of the road in Lake Hallie, Wisconsin and driven through a ditch where the girls were working on the opposite side of the road, hitting five people.

Treu and his pal fled the scene, but investigators were able to track him down by following a trail of vehicle fluid 1.8 miles to his home where they found his car. He had fled but turned himself in — along with his passenger — later that day.

“This is a horrible reminder of our nations epidemic of self-indulging with substance abuse without regard of the consequences. Words cannot describe our Lake Hallie community’s sorrow for the witnesses, victims, and their families. This senseless crash was completely avoidable,” said Lake Hallie Police Chief Cal Smokowicz.