You are here: Home / Florida / Florida Woman Pulls Knife on Man Who Complained of Her Loud Fart in Store 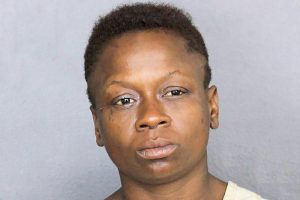 DANIA BEACH, Florida — He smelled it and she dealt it.

A Florida woman was busted for pulling a knife on a man and threatening to “gut him” after he complained about her loudly farting while on line a store.

Police in Dania Beach say Shanetta Wilson, 37, was on line at a Dollar General when she let one rip. When the man standing behind her, John Walker, complained, things got ugly.

According to the police report, Wilson allegedly pulled a small “lock back knife” from her purse, “opened the knife and told the victim she was going to ‘gut’ him.”

Cops say that while Wilson mad the threat, she pulled back her right hand with the knife as if she was going to attack the victim with it.

Walker told officers he  was “in fear that he was going to be stabbed by the defendant,” the affidavit read.

When cops arrived at the scene, they managed to track Wilson down a few blocks after Walker identified her.

Wilson was charged with aggravated assault with a deadly weapon without intent to kill and held on $2,500 bail.