You are here: Home / Featured Story / Woman Who Shot Beau to Give Him ‘Nose Job He Wanted’ Pleads Self Defense 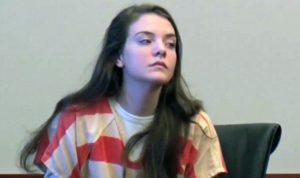 NEWPORT, Kentucky — A woman who told cops that her boyfriend got “the nose job he wanted” when  she allegedly shot him in the face in 2012, has testified that the shooting was self-defense.

Shayna Hubers, 27, was convicted of murder in  2015, and sentenced to 40 years in prison, but had her conviction thrown out the following year, when it turned out a juror in her trial had a prior felony conviction.

In court, Hubers testified that her relationship with lawyer Ryan Poston, was abusive from the start.

“I remember thinking that he had a strong personality. I feared him,” she said in her testimony, WXIX-TV reported. “I felt like I need to do what he was telling me to do.”

In one incident, Hubers said, Poston threw her out of a condominium onto the porch. When she tried to get back inside, Hubers said Poston repeatedly slammed the door on her body.

The two reportedly dated on and off for a year. But things took a turn a for the worse in the fall of 2012.

On Oct. 12, 2012, Hubers allegedly shot Poston six times at his Highland Heights condominium. That night, he was supposed to meet a former Miss Ohio 2012 beauty queen for a date, the Ohio court heard.

Prosecutors have argued that Hubers acted out of jealousy. She often bombarded Poston with text messages during their many breakups and would log onto his Facebook and block women, investigators testified.

After the first trial, Hubers was sentenced to 40 years in prison without early parole on the account of showing no remorse.

At the time, Campbell County Circuit Judge Fred Stine called the killing “as cold-blooded an act as I’ve seen.”