You are here: Home / Dumb + Dumberer / 3 Girl Scouts, 1 Adult Killed in Hit-and-Run While Picking Up Trash 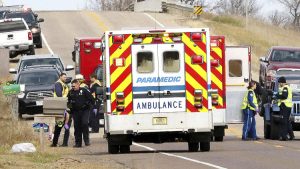 Authorities at the scene of the hit-and-run crash that left 3 girl scouts, 1 adult dead

LAKE HALLIE, Wisconsin — Three girl scouts and an adult chaperone were tragically killed when a pickup truck lurched off the road and plowed into them as they collected trash from the side of a highway.

Police say the 21-year-old driver, Colton Treu, fled the scene but later turned himself in. He is expected to be charged with four counts of homicide through the negligent use of a vehicle, cops said.

The accident occurred Saturday morning along a county road in Lake Hallie, Wisconsin, where the girls — all fourth graders who attended Halmstad Elementary School in Chippewa Falls — were collecting trash as part of a volunteer cleanup program.

Cops say Treu inexplicably veered off the road into a ditch where the girls were working, striking several children and a woman who was accompanying them. Two girls and the chaperone died at the scene. Two others were airlifted to a hospital, where one of them died.

Police said there was no blind spot in the area and it was unclear why Treu left the road. Investigators were looking at whether he had been distracted by something at the time.