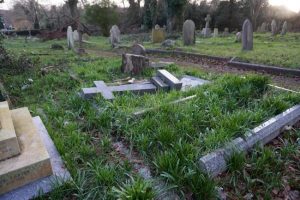 LYNN, Arkansas –An 8-year-old boy died in a freak accident when a tombstone toppled over and crushed him in an Arkansas church graveyard.

The tragic mishap occurred during a birthday party Saturday afternoon at the Pleasant Hill Missionary Baptist Church in Lynn, when the boy wandered into the graveyard out back.

Officials believe the boy had been playing on a large tombstone when it broke and fell on him, KAIT-TV reported.

The boy was rushed to a local hospital where he was declared dead. Authorities have deemed the death an accident.

Members of the church said they were devastated by the accident.

“Just an eight-year-old rambunctious young man, just like many eight-year-old young men and full of life,” the church’s Pastor Jeff Neely told the station.  “There is definitely a lot of prayer being sent up on behalf of their family.”

The boy’s name has not been released.