You are here: Home / Creepy / Abduction Feared in Case of Missing California Mom 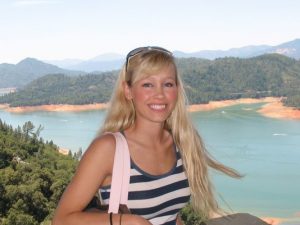 Sherri Papini disappeared while going for a run

REDDING, California — A California mother of two disappeared while out for a jog and her family fear she has been abducted.

The Shasta County Sheriff’s office are hunting for 34-year-old Sherri Papini who didn’t return home after heading out for a run in Northern California on Nov. 2.

Papini’s husband, Keith, contacted police after he returned home late that afternoon and found that his wife was not home and that their two children had not been picked up from daycare.

Using the Find my iPhone app, the husband located her phone and headphones and intersection in a rural area nearby. Some strands of Papini’s blond hair were also found at the scene.

Police searched the area and found no sign of Papini, but witnesses reported seeing her jogging there in the hours before she was reported missing.  Shasta County Sheriff Tom Bosenko says investigators have contacted several sex offenders who are registered in the area, but have not identified a suspect. They also interviewed several of Papini’s family members.

Papini’s family said it was normal for her to go jogging in the area at that time of day. She would then pick up her two children from daycare in the afternoon and spend the rest of the day with them around the house.

“Knowing that she didn’t pick up our kids —  there is no way that ever happens,” her husband, Keith, told ABC News. “Everybody who knows my wife knows that there’s no reason for her to leave.”

“She was definitely taken against her will,” he said.

Papini is described as 5-foot-4, and weighing around 100 pounds. The family is offering a $50,000 reward for any information that leads to locating her.