You are here: Home / Alaska / Alaska Police Hunt for Bumbling Thief Who Wore a Box on His Head 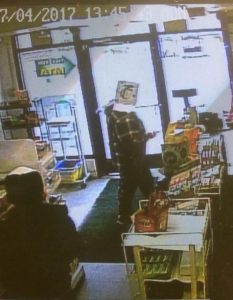 Not the most menacing get up.

ANCHORAGE, Alaska — If he has any brains at all, he’ll use the money he stole for a better disguise.

Police in Anchorage, Alaska are hunting a for a knife-wielding thief who tried to rip off two convenience stores while wearing a cardboard box on his head as a disguise.

The first episode took place Monday at Big Mike’s Tesoro gas station when the man walked in wearing the box and brandishing a knife and demanded cash and cigarettes from the clerk, who handed the items over, investigators said.

“Some goofball wearing a cardboard box on his head with two eye holes punched out came in and threatened her,” manager Kevin Wright told the Anchorage Dispatch News. “There was a customer in the store that he didn’t see, who was already calling 911.”

About six hours later, a box-wearing man walked into the nearby Value Liquor, holding a knife and demanding cash. But this time, another customer walked in and demanded the suspect leave and he walked out empty handed.

Police dogs were able to track a scent from the second robbery attempt, but the suspect got away and no arrests have yet been made.