You are here: Home / Dumb + Dumberer / Bad Dad Busted for Having Toddler Climb Into Mall Game Machine to Steal Prizes 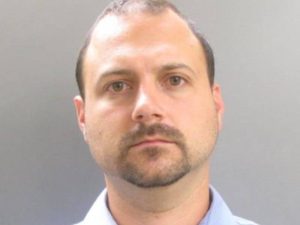 A Massachusetts school teacher turned himself in after police released  video of him instructing his toddler daughter to climb into a shopping mall game machine and steal the prizes from inside.

Anthony Helsinki, 34, a public school teacher in Andover, Massachusetts, was videotaped by passersby as he hunched over the slot at the bottom of the Keymaster game machine at the Mall at Rockingham Park in New Hampshire earlier this month.

Standing with a young boy next to him, Helsinki could be seen whispering instructions to a little girl who had climbed into the machine and was handing prizes out to her father through the slot.

Helsinki and the kids then left with the prizes, Salem police said.

After police posted the video online last week, they say they received numerous tips identifying Helsinki. He turned himself in with his attorney after police had obtained a warrant for his arrest.

Theft from Mall at Rockingham Park

Attached is a video from the incident Saturday night at the Mall at Rockingham Park. The video has intentionally been blurred out to protect the identity of the involved children. Anyone who recognizes the suspect in this case is urged to call Detective Dempsey at 603-890-2343 or message us here on Facebook.

Officials with the Andover Public Schools system, confirmed Helsinki was a teacher in the district, and say he has been placed on temporary leave.

“One of our teachers at the Doherty Middle School was involved in an incident in Salem, NH last week. Andover Public Schools is fully cooperating with authorities,” a spokeswoman said in a statement. “The teacher has been placed on administrative leave pending the outcome of an investigation.”