You are here: Home / Animals / In the Battle of Elk Vs. Chopper, No One Wins 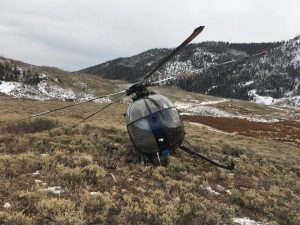 HEBER CITY, UTAH — If I’m going down, you’re coming with me.

A defiant elk took down a research helicopter trying to capture it in a remote corner of Utah, when the animal jumped into the chopper’s tail rotor, destroying the aircraft.

The helicopter and its crew were working for the state Division of Wildlife Resources trying to sedate, capture and tag the elk in a mountainous region in the eastern part of the state when the crash occurred Monday, police said.

As the chopper hovered about 10 feet off the ground, the crew attempted to throw a net over the elk, which reared back, striking the helicopter’s tail rotor and nearly snapping it off.

The chopper landed hard on the ground, but the two crew members were not hurt. The poor elk, however, did not survive, authorities said. 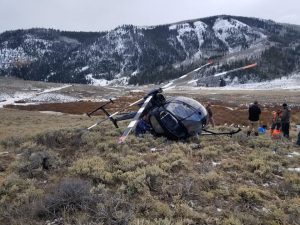 Wildlife officials use tracking collars to help monitor elk migration paths and survival rates. In all, the state tags about 1,300 animals each winter. While almost all are captured using helicopters, the fluke crash was the first of its kind officials could recall.