You are here: Home / Drunk + Stoned / ‘I Blew Half His Face Off’ — Loudmouth Killer Boasts to Undercover Cop 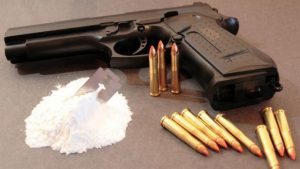 KANSAS CITY — It’s the kind of thing you probably don’t want to be blabbing about all over town.

A Kansas City drug dealer landed himself in major trouble when he admitted the details of a grisly slaying he committed a few days earlier to an undercover cop he was selling drugs to, prosecutors allege.

Orval Johnson, 24, was meeting with the officer for the fourth time to sell him cocaine in March and made the eye-popping confession when the cop noticed a gun hanging out of Johnson’s pants and asked what was going on.

“They tried to rob me out there the other day and shit,” Johnson allegedly said, according to an affidavit filed in federal court. “I had to kill that bastard, blew half his fucking face off.”

“He tried rob me and kill me and my bitch, I blew half his fuckin face off,” Johnson allegedly continued. He then told the cop that he had his girlfriend “play the rape thing,” meaning she’d shot the man in self defense because he tried to rape her.

A review of recent killings in the area quickly turned up the shooting death four days earlier of 30-year-old Ricky Boswell in which a woman told cops she shot him because he had tried to rape her. Turns out the woman was Johnson’s girlfriend.

After being taken in for questioning, Johnson admitted that he had met with Boswell to sell him cocaine, but that Boswell pulled out a gun to rob him. The two men scuffled, and Johnson said he told his girlfriend to give him his gun. She shot Boswell and when he then tried to attack her, Johnson admitted he shot him several times, killing him. He then wiped his DNA off the gun and concocted the rape story with his girlfriend to cover his tracks.

At the time of his death, Boswell had only been out of jail for three months after serving four years in a murder case.