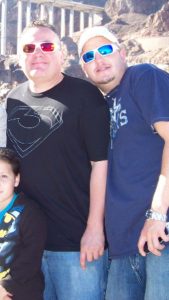 LAS VEGAS  — This gives a whole new definition to the term “sports nut.”

A fight between a pair of brothers over the Green Bay Packers and Dallas Cowboys game turned deadly when one of them pulled out a knife and fatally stabbed his sibling, police said.

The skirmish broke out after Green Bay scored a stunning victory with a last-second field goal on Sunday and the two brothers, Robert and Justin Dale Boyer, began arguing.

Things got so heated between the men, one of whom is a die-hard Cowboys fan and both of whom had been drinking, that the two had to be separated, cops said.

But moments later, 40-year-old Justin, who was visiting from North Dakota,, ran at his 46-year-old brother, prompting Robert to pull out a knife and stab Justin several times, police said.

Justin Boyer then fled the house and began pounding on neighbors’ doors, prompting a call to police. When cops arrived they found him covered in blood and rushed him to a local hospital where he later died.

Police have not yet arrested Robert Boyer, who was taken to a local hospital to be treated for injuries he suffered in the fight, as they say they believe he was acting in self defense, although the investigation is ongoing.

KSNV-TV reported that Justin Boyer may have suffered from some kind of mental illness, citing police sources.