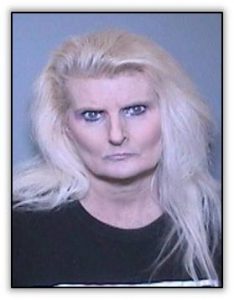 TUSTIN, California — A depraved fraudster posed as a cop to force a female patron out of a southern California watering hole where she allegedly groped and robbed her, authorities said.

Denise Latta, 54, of Huntington Beach, went into a bar in Tustin on Sept. 13, and whipped out a badge as she approached the bartender and female patron, police said.

Investigators say Latta instructed the woman to produce an identification card, which the phony cop then cut several pieces. Latta then demanded the victim leave the bar with her.

Once outside, Latta forced the victim to put her hands on a wall and spread her feet, and while searching her, touched her breast and groin through her clothes, police said. Latta then told the victim that she wasn’t going to arrest her and told her to leave and never come back to the bar.

In late November, Tustin police tracked Latta down and charged her with kidnapping, robbery, false imprisonment, sexual battery, and impersonating a police officer. She is being held on $100,000 bond.

When Latta was arrested, officers found fake badges, identification cards that read “agent,” and clothing that read “fugitive recovery agent,” among her belongings.

Latta told detectives that she worked as a private detective and bail enforcement officer, but lacked any identification to prove it. Latta was also in possession of several items that led detectives to believe this may not be an isolated incident and cops are looking for additional victims.