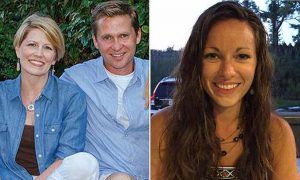 Murder-Suicide: Jennair Gerardot (l) shot Meredith Chapman (r) in the head after discovering she was having an affair with Mark Gerardot (c),

RADNOR TOWNSHIP, Pennsylvania — An illicit extramarital affair ended in a blood-soaked murder-suicide when the enraged wife of a University of Delaware official broke into his lover’s house, then shot her in the head when she came home, before turning the gun on herself.

Police say the bloodshed appeared to the result of a well-planned out murder-suicide plot hatched by 47-year-old Jennair Gerardot, after she discovered that her husband, Mark, had been carrying on with a younger woman he used to work with.

Cops discovered the two women’s bodies Monday night in the quiet suburban home of Meredith Chapman, a 33-year-old assistant vice president at Villanova who had, until recently, worked as a communications officer at the University of Delaware with Mark Gerardot.

In a 911 call, police were told “there’s blood everywhere,” by a person who had initially found the scene, according to the Wilmington News Journal.

Investigators believe that the scorned wife had broken into Chapman’s home earlier in the evening, wearing a wig and carrying a Taurus Tracker .357 revolver. She then lay in wait until her husband’s lover came home.

When Chapman opened the door, police say Jennair shot her once in the head, and then shot herself.

“You had a man who was married that was having an affair with this other woman. The wife knew about it. And this was a calculated, planned attack,”  said Bill Colarulo, superintendent of the Radnor Township police. “She broke into the house. She was lying in wait, and she shot her as soon as she walked in, and then she shot herself.”

He said investigators had uncovered “emails and text messages indicating what she planned to do.”

“We believe the husband was in the area under the belief that he was meeting the other woman for dinner, and when she didn’t show up, that’s when he got concerned and showed up at the house,” he said.

In the weeks before the shooting, Jennair said on an online forum that her husband wanted a divorce and asked for advice finding a good divorce lawyer or marriage counselor.

Chapman was married to a city councilman  in the Delaware city of Newark, but the two were no longer living together, the Philadelphia Inquirer reported.

Chapman ran unsuccessfully as a Republican for a state Senate seat in Delaware in 2016. In her bio on her campaign website Chapman said she had worked as a communications manager for former Congressman Mike Castle, R-Del. 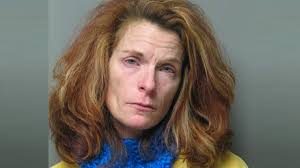 DOVER, Delaware — A fed-up Delaware housewife pleaded guilty to the slow, drawn-out death of her bodybuilder husband by spiking his steroids with anti-freeze.

Jamie Baker, 47 admitted to using a syringe to inject small doses of the toxic chemical into her husband James’ weightlifting drugs, poisoning him over a period of several months, prosecutors said.

James, who was a competitive bodybuilder, dropped dead on the couple’s bedroom floor in 2013 at the age of 42. An autopsy revealed that he had a buildup of ethylene glycol — a chemical found in antifreeze — in his kidneys.

Police said that the compound, if ingested in small doses over a long period of time, will crystalize in one’s kidneys, and eventually lead to death.

Investigators had found evidence of the chemical on bottles containing steroids James had used and his death was deemed a homicide.

Nearly a year after his death, Jamie confessed to police that she had injected antifreeze into her husband’s steroid supply. She never told investigators what drove her to kill her husband. 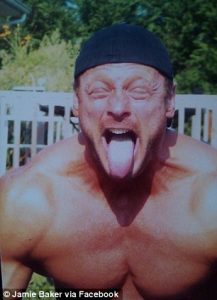 James Baker died after chemicals built up in his kidneys

The couple had been married for 21 years and had two daughters.

Jamie Baker pleaded guilty to second-degree murder and  faces up to 15 years behind bars.