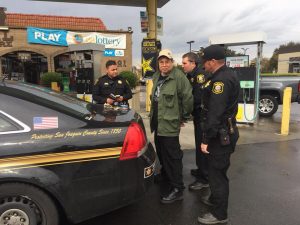 Saito being picked up by cops in Stockton, California

STOCKTON, California — A cross-country manhunt for a deranged killer who escaped from a Hawaii mental hospital ended in California when an eagle-eyed cab driver picked the man up and then alerted police.

Randall Toshio Saito, 59, had somehow managed to board at least two planes after walking out of the Hawaii State Hospital Tuesday morning, landing in California where he was picked up Wednesday morning in Stockton, the San Joaquin County Sheriff said.

Saito had been called a “classic serial killer” by authorities warned that he should be considered dangerous.

Saito was acquitted by reason of mental insanity in the random murder of a Sandra Yamashiro, whom he shot and stabbed repeatedly at a Honolulu shopping mall in 1979.

He was diagnosed with sexual sadism and necrophilia and had been in the state mental hospital since 1981.

Authorities in Hawaii have placed seven hospital workers on leave as an investigation into how Saito escaped gets underway, the Honolulu Star Advertiser reported.

Police say Saito managed to get on a charter flight from Oahu to Maui, paying cash, and then boarded a commercial flight to San Jose using a fake ID. It is believed that Saito meticulously planned his escape and that it wasn’t that he just saw an opportunity.

Detectives say Saito has a brother who lives in the Stockton area.

Randall Saito is on the lam

KANEONE, Hawaii — A sadistic killer who had been deemed “ a classic serial killer” by prosecutors, has escaped from the Hawaii mental hospital where he has spent the past 36 years and is on the lam, police said.

Randall Toshio Saito, 59, walked out of the Hawaii State Hospital Tuesday morning and hasn’t been seen since. Police say that shortly after his disappearance, Saito boarded a plane from Oahu to Maui but his whereabouts after that are unknown.

Police say he should be considered dangerous and should not be approached.

Saito was acquitted by reason of mental insanity in the brutal murder of a Sandra Yamashiro, whom he shot and stabbed repeatedly at a Honolulu shopping mall in 1979. Prosecutors said he picked his victim at random.

He had been in the state mental hospital since 1981.

In 2000, his attorneys sought to have him released,  but the move was denied by a judge after prosecutors objected, calling him a “classic serial killer.”

“He is a psychopathic predator whose mental condition continues to represent a serious danger to the community,” deputy Prosecuting Attorney Jeffrey Albert said at the time.

In 1993, Saito’s request for conditional release was denied, with the court ruling that he still suffered from sexual sadism and necrophilia. Two years ago, a judge denied a motion for Saito to be allowed to leave the hospital’s grounds without an escort.