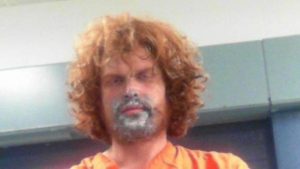 Police busted a man accused of beating his mother with a spatula after he had been huffing spray paint, authorities said.

Glenn Allen Casdorph, 30, was charged with malicious wounding after cops found him with silver all over his face outside his mother’s home in West Virginia, WCHS-TV reported.

Authorities were familiar with Casdorph from prior run-ins and say he was well known for huffing paint.

When cops arrived at the house after receiving a report about domestic violence, they say they found Casdorph sitting on a bench in the yard, with silver paint on his face and hands and holding a large steel bar.

Once inside the home, they found Casdorph’s mother with a bandage on her head and blood on her shirt and on her neck, cops said. She was treated at the scene. 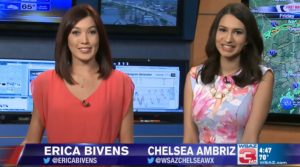 CHARLESTON, West Virginia — The weather girl on a local TV news broadcast was arrested after allegedly fracturing the show anchor’s skull in a boozed-up bar brawl over the anchor’s husband.

Meteorologist Chelsea Ambriz, 26, was charged with battery after allegedly tackling WSAZ-TV station anchor Erica Bivens and knocking her to the ground. Bivens was left with a fractured skull and ruptured ear drum in the tussle, the Charleston Gazette-Mail reported.

Bivens had been out drinking with her husband, Donald, in Charleston when the couple bumped into Ambriz at the local Broadway Bar in downtown Charleston, according to a police report obtained by TV news blog, Ftvlive.com.

Ambriz, who works with Biven on the station’s 4 p.m. newscast, began flirting with Donald — but he spurned her advances, according to the police report.

Bivens, who already had a rocky relationship with Ambriz allegedly confronted the weather girl about making moves on her man.

That’s when Ambriz allegedly lunged at Bivens — causing both of them to tumble to the ground near a bartender’s station, according to the police report.

Bivens was rushed to the hospital with hearing loss and a lump on her head. 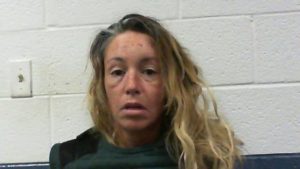 LERONA, West Virginia — A woman who allegedly chopped her boyfriend’s head off, chillingly told cops, “You have to take me back and let me get my heads,” as they put her in the back of a squad car, police said.

Roena Cheryl Mills, 41, was found covered in blood and wearing a glove on her left hand when cops arrived at her Lerona, West Virginia home on April 1, cops said.

Using a fake name, Mills claimed she had been bloodied after being pushed through a glass door, officers said.

But she the grew combative and officers arrested her. Once inside a police cruiser, Mills said: “You have to take me back and let me get my heads,” said, according to WVNS-TV.

Later that day, cops found the decapitated body of a man, who was later identified as 29-year-old Bo Allen White, was  found on another block in town.

A judge ordered that Mills undergo a thorough mental status evaluation to determine if she is capable of standing trial in White’s brutal death. 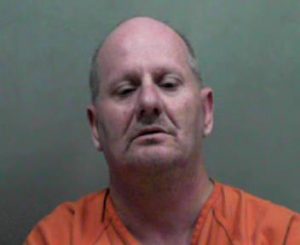 A West Virginia man has been busted for breaking into a neighbor’s home and making off with three rolls of toilet paper.

State police arrested Phillip Burnside of Friday after the victim got an alert from his home security system that someone was inside his house, WSAZ-TV reported.

The homeowner then called his sister, who lives nearby, and asked her to swing by and check on the house. When she got there, she found Burnside walking out. He initially pretended to be a concerned neighbor who was just checking on what was happening and even helped her look around for an intruder.

But surveillance footage from the home later revealed to investigators that Burnside was in fact the intruder. He the confessed that he had broken in to steal three rolls of toilet paper.

Cops say they believe Burnside had gotten in through a window, and they suspect he has broken into and stolen items from the home before.

Burnside was initially charged with nighttime burglary and held on $50,000 bond, but polcie say he could face additional charges. 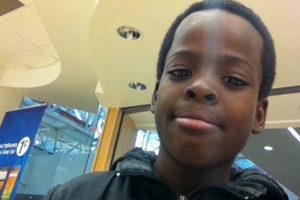 James Means, 15, was killed after an argument in the street with a white gunman

CHARLESTON, West Virginia — A 62-year-old white West Virginia man showed no remorse for fatally shooting a black teenager after they bumped into each other on the street, calling him just “another piece of trash,”cops said.

“The way I look at it, that’s another piece of trash off the street,” Pulliam was quoted as saying in a criminal complaint signed by Det. C.C. Lioi.

Police say Pulliam left the scene after the shooting and went to have dinner and then visit a friend. A revolver was found at the friend’s house.

Pulliam has been arraigned on a state murder charge and federal authorities are reviewing whether the shooting qualifies as a hate crime.

In the criminal complaint, witnesses told cops that Means and Pulliam bumped into each other in front of the store and exchanged words. Pulliam then went inside but when he later came back out and passed a nearby porch where Means and some friends were sitting, the argument flared up again.

Means then crossed the street to confront Pulliam, who pulled out a .380 caliber revolver and shot the teen twice.

Pulliam told WCHS-TV in a jailhouse interview that he felt threatened by Means and his friends. He said he only shot in self-defense and that race had nothing to do with it and denied giving the statement attributed to him by investigators. 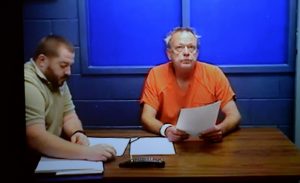 Others in the neighborhood told the Charleston Gazette-Mail that Pulliam had sparred with minority teens in the area before and had used racial epithets.

That paper reported that Pulliam was not legally allowed to carry a gun after pleading no contest to a charge of domestic battery in 2013. In that case, he was charged with hitting his pregnant daughter in the face several times with a closed fist and kicking her in the stomach. He also shoved his wife to the ground during that incident, according to the paper.