You are here: Home / Darwin Awards / Club-goer Dies After Sucking Down Bottle of Tequila in One Sip 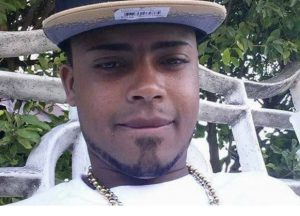 Kelvin Mejia partied a bit too hard for his own good

An overly amped-up club-goer in the Dominican Republic met his end after guzzling an entire bottle of tequila in one swig to win a bet.

Kelvin Rafael Mejia, 23, collapsed just minutes after collecting his winnings of $630 and later died of acute alcohol poisoning, according to the El Universal newspaper.

The tragic episode was captured on camera in late February. At first, Mejia is seen guzzling happily from the bottle. Then, as he is collecting his cash, his head starts to slump to one side. The video then cuts to Mejia unconscious on the ground.

He was rushed to a local clinic where he was declared dead. Mejia had recently become a father to a baby girl, the paper reported.

The contest started when Mejia — who was a regular at the club — approached a table of men at the Vacca Lounge who were laying down bets on who could drink the most tequila in one sip and asked to join in.

The management of the club insisted they had nothing to do with in the fatal incident.

“The only contests we ever do are dance contests or costume contests, with the award of bottle of champagne or other drink,” the club said in a statement.