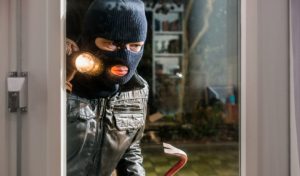 The burglar really made a mess of this break-in

EL PASO, Texas — He accidentally took justice into his own hands.

A clumsy burglar killed himself after he slashed his arms on jagged glass from a window he broke to enter a home and bled to death, police say.

Cops in El Paso, Texas say the homeowner came home last week to find broken glass and pools of blood on the floor, so called police.

When officers arrived, they discovered the body of 28-year-old Javier Tellez, Jr. on the floor.

“Investigators determined that the man had lacerated his arms on the broken window while entering the residence and unable to stop the bleeding, the man died,” the El Paso police department said in a statement.

Police say that they are continuing to investigate.