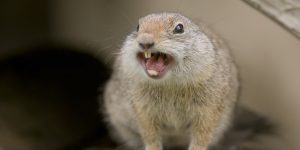 It takes one angry squirrel to inflict $90K worth of damage

CHESAPEAKE, Virginia — On the surface, squirrels may look bushy-tailed and cuddly, but underneath lurks a vicious monster, one Virginia contractor alleges.

Contractor Daniel Felice claims in a lawsuit that he was viciously attacked by a family’s pet squirrel last summer and left “profusely bleeding” while working a job nearby. Now he is seeking $90,000 in damages from the family, Deborah and Paul Desjardin, according to the Virginian-Pilot.

The couple, however, insist they have never kept a squirrel as a pet and that the animal in question is just an overly friendly neighborhood creature.

But Felice’s suit says he saw the beady-eyed killer run back to the Desjardin’s home after the bloody assault. The suit says the squirrel ended up as the Desjardin’s pet after the family dog brought it home wounded in the spring and they nursed it back to health.

Felice’s lawsuit claims the squirrel got so comfortable with the family that it began to peck Deborah Desjardin on the lips as if “giving her a kiss.” It further accuses the couple of  encouraging the fluffy woodland creature to approach humans.

Paul Desjardin admitted to the newspaper that his family fed the squirrel a little food and that it was friendly, but insisted it “was never controlled by us.”

It also says the squirrel attacked a little girl in the neighborhood three days before Felice suffered his injuries and that the girl’s parents had alerted Deborah Desjardin that they had a killer among their midst.

City codes bar residents from keeping wild animals without a permit. Deborah Desjardin was hit with a misdemeanor unlawful possession of wildlife charge by an officer with the Department of Game and Inland Fisheries after the alleged attack on Felice, but the case was later dismissed.

Paul Desjardin said he was unaware of the incident involving the girl and that he and his wife were already proven innocence in court when the charge against them was dismissed.

“We’ve already proven the fact that this wasn’t our squirrel,” Desjardin said. “It’s not a pet.”