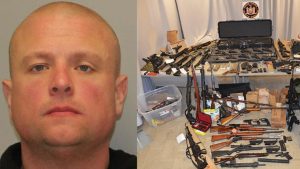 PLATTEKILL, New York — A New York police officer has been charged with manufacturing dozens of illegal handguns and assault rifles and selling them to outlaw motorcycle gang members, authorities said.

Gregg Marinelli, 38, who is a sergeant with the New York City Department of Environmental Protection Police, is accused of making the guns — including at least one fully automatic assault rifle — in his Plattekill home.

He then allegedly sold them to people who are legally barred from possessing weapons because they had felony convictions, such as members of outlaw motorcycle groups.

Marinelli is accused of using his marked police car to sometimes deliver the guns, which had no serial numbers, making them hard to trace.

Authorities say the investigation into Marinelli arose out of a recent drug trafficking case, dubbed “Operation Bread, White and Blues,” which looked as cocaine and pain pill trafficking by members and associates of self-professed “outlaw” motorcycle clubs. During that probe, investigators learned that Marinelli alerted a suspect that he was a target.

Investigators recovered numerous guns, gun parts and tools used to manufacture weapons at Marinelli’s home. State Police have also recovered 13 handguns and assault rifles from others which were manufactured and sold by Marinelli.

He faces a slew of charges including criminal sale and criminal possession of a firearm and hindering prosecution. He is being held on $600,000 bond.