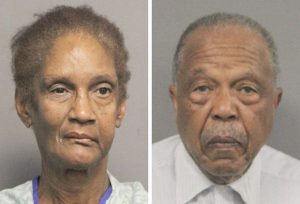 KENNER, Louisiana — A con artist posing as a devoutly religious woman and her boyfriend have been charged with running an old-fashioned “pigeon drop” scam to bilk an elderly woman out of her cash.

Police say Vanessa Favors, 61, of Atlanta, Georgia., and Milous Brown, 74, of Birmingham, Alabama, were busted after targeting a 65-year-old woman at a store in Kenner, Louisiana, but say they have been arrested for running similar scams in the past.

“We certainly believe they are traveling and preying on the elderly to scam them,” Kenner Police Lt. Brian McGregor told the New Orleans Times-Picayune. “We’ve also been in contact with other police jurisdictions who are reviewing similar cases.”

In a “pigeon drop”con, scamsters typically pretend to find a bag, wallet containing a large sum of cash, and approach their mark asking if the bag belongs to them. The fraudsters then propose splitting the money, but only after agreeing to a complicated arrangement in which the victim hands over cash as security while a lawyer ensures their keeping the money is legal.

In this case, Favors is charged with approaching the woman outside a Kenner grocery store. Favors, who was carrying a bible, asked the woman if she dropped her bag and then opened a purse holding a large wad of cash.

Favors offered to share the money for a fee and got the woman to agree to drive to a nearby where Favors said she planned to contact an attorney, cops said. On the drive over, cops say Favors began reciting biblical verse loudly, distracting the victim while she stole her wallet.

When they arrived at Wal-Mart, Favors took the handbag and the victim’s wallet inside where she met with Brown and quickly ran up several hundred dollars worth of items on the woman’s credit cards.

It was only after Favors did not return that the woman became suspicious and realized her wallet was gone.

Police believe the couple pulled off a similar scam on a 69-year-old woman outside a Winn Dixie in Kenner in 2013. Investigators believe other victims may have been targeted in and around New Orleans but may not have come forward because they were embarrassed.