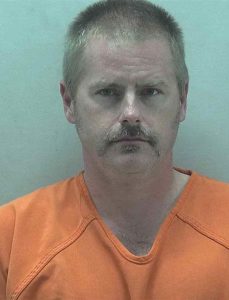 HAMMOND, Indiana — A crackpot engineer who had repeatedly run for local office in northwest Indiana, has been charged with mailing a pipe bomb that nearly killed a postal worker.

Eric Krieg, 45, of Munster, Indiana was also charged with mailing a bullet to a man he had sparred with on a political blog with a note warning that “the next one will be in the back of your head,” federal prosecutors said.

Krieg, who has run for various offices as a Republican in the heavily Democratic Lake County over the years, alleged had intended the bomb for an attorney for a man who had won a defamation suit against Krieg for $60,000, forcing him to declare bankruptcy.

The attorney’s brother is Hammond Mayor Thomas McDermott Jr., with whom Krieg had also fought with over politics over the years.

Federal officials say Krieg had dropped the package off at an East Chicago post office on Sept. 6, but that it went off as it was being handled by a 7-months pregnant postal worker. She and the baby survived the blast.

Three weeks later, authorities allege Krieg sent an envelope containing the bullet to a man he had argued with several times on a local political chat board.

Krieg has a master’s degree in engineering from the Illinois Institute of Technology and worked at the BP Whiting oil refinery — the sixth largest in the U.S.  — located on the shores of Lake Michigan.

He was a charged with possession of a destructive device and transporting explosive materials.