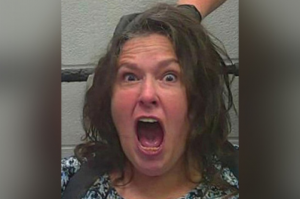 HURON, Kansas  — This is what happens when you let the inmates run the asylum.

Police in the small Kansas town of Huron were forced to use a Taser to subdue a town councilwoman who later bit a deputy’s thumb so badly she broke it, officials said.

Cops had gone to arrest Carol Fowler last Friday on a warrant for failing to show up to court for a prior drunken disorderly bust. But instead of going quietly, Fowler kicked and scratched officers, forcing them to tase her, the Atchison Globe reported.

She was held over the weekend, and when officers tried to complete the booking process on Monday, Fowler fought with them again, biting and officer’s thumb with such force it broke.

“They had five officers in there and it was a struggle for all of them to get her to comply,” Atchison County Sheriff Jack Laurie told MSC News. “She was able to get a hold of one of the correction officer’s thumbs with her teeth and actually broke the bone in his thumb.”

Fowler is one of five people on the city council of Huron, a town in eastern Kansas with a population of 73 people. She was elected last November after receiving two votes, and took office in January.