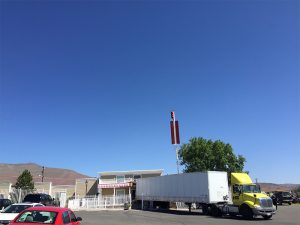 MOUND HOUSE, Nevada — A crazed ex-trucker stole an 18-wheeler and rammed it into the notorious Moonlite Bunny Ranch brothel in Nevada, causing extensive damage to the building’s facade, authorities said.

The brothel, which known after being featured in the HBO series “Cathouse,” was open for business at the time of the early morning crash, but no one was injured.

The suspect, identified as Brian Brandt, 40, of Reno, had allegedly stolen the truck from his former employer, before backing it through the front gate of the ranch around 4 a.m., the Lyon County Sheriff’s office said.

He was charged with assault with a deadly weapon (the truck), destruction of property and  possession of stolen property.

Ranch owner Dennis Hof said Brandt was wearing full body armor when he ran out of the truck following the crash. Hof said the episode appeared to be “an apparent sadistic attempt to gain notoriety,” but that business was unaffected.

Mikki Lynn said she was in with a client when the crash occurred which caused the whole building to shake.

“I was totally on top of this guy, riding and all of sudden it felt like an earthquake and the whole building started shaking and I’m like, ‘Damn, I’m good, but I’m not that good. What’s going on?’ So I throw on a towel and run out and get out here and he put the whole damn truck in the back door. I tried to tell him that was a specialty party and he had to pay extra for that,” she said. 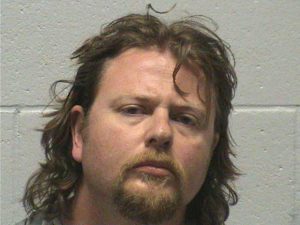 The Reno Gazette-Journal reported that Brandt had been arrested a little over a week before the crash and charged with battery and conspiracy to destroy property, an episode that led to his dismissal from the trucking company where he had worked.