SARASOTA, Florida — A Florida shopper gave whole new meaning to the notion of a creepy old man after being caught repeatedly getting down on his hands and knees to stare up women’s skirts at a Florida Wal-Mart. 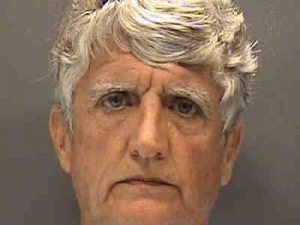 Alan Ralph has an odd way of getting his jollies

Alan Ralph, 62, was charged with three counts of voyeurism after police watched surveillance footage showing him lurking around the Sarasota superstore in late October, biding his time before kneeling down to the ground and stare up multiple women’s skirts.

Ralph’s boorish behavior was brought to authorities attention by one of the women who caught him twice trying to get a glimpse up her skirt.

Detectives caught up with Ralph by using his credit card information obtained through transactions at the store. He was busted on Monday without incident and held without bond.

Investigators believe there may be more victims out there and asked anyone with information to contact the Sarasota County Sheriff’s office.