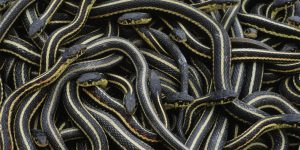 A vehicle carrying dozens of deadly snakes and an alligator, overturned in southern Texas, spilling its potentially lethal cargo on the road, in an episode that is the stuff of nightmares.

The Bexar County Sheriff’s office said the truck was carrying rattlesnakes, copperheads and water moccasins, when it suffered a blowout Thursday southwest of San Antonio and flipped over, KSAT-TV reported.

Wildlife wardens worked feverishly to corral the creatures, but had only succeeded in rounding up 23 of the 30 reptiles that had been on board. The alligator was among the animals that remained at large.

The driver and a child who was in the car when it flipped, were hospitalized. Authorities contacted homeowners in the area to alert them to the presence of unaccounted for deadly animals.