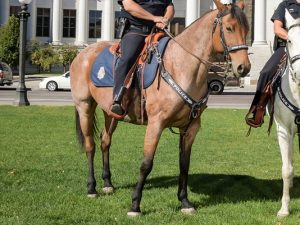 MC Hammer had to be put to sleep after developing colic

DENVER — A Denver mounted cop was docked just one day of vacation for leaving his horse without food or water overnight, after which it developed such a severe case of colic it needed to be put down.

Police internal affairs decided to give Officer Joseph Teeter such a light punishment for the death of his horse, MC Hammer, because it wasn’t intentional neglect and they couldn’t determine if the animal’s illness was caused by the lack of food.

“Though not intentional on his part, Officer Teeter’s forgetfulness exposed a live animal to cruel and extreme conditions,” a disciplinary letter obtained by the Denver Post said.

Investigators found that Teeter returned with MC Hammer to the police barn at the end of the day on Sept. 26, tied him to an eye bolt in a stall and removed his saddle. Teeter then went to another room where he got distracted by paperwork, and eventually left without giving the horse water or food.

The next morning, another officer found MC Hammer tied up and gave him food and water. At first, the animal seemed “bright, alert and responsive” for several hours. But the horse began showing signs of pain a few hours later and was taken to an animal hospital.

The next day, the horse was diagnosed with colic and veterinarians determined he would not recover and was euthanized. MC Hammer was 10 years old and had been donated to the force in 2015.

Teeter, who has been with the department since 2004, remains assigned to the mounted unit. The letter said he took full responsibility for the horse’s death.

“The officer feels horrible about this situation,” department spokesman Christine Downs said. “It was an accident. We love our animal partners.”