You are here: Home / Sad / Disgraced Judge Kills Ex-Wife He Brutally Beat in Front of Kids in 2014 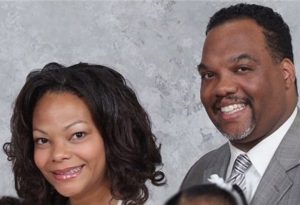 SHAKER HEIGHTS, Ohio — A disgraced former judge has been arrested for fatally stabbing his ex-wife after serving time for brutally beating her in front of their kids, cops said.

Lance Mason, 51, allegedly stabbed his estranged wife, Aisha Fraser Mason, a sixth-grade school teacher, at his home on Saturday, police said. He then fled the scene in his SUV and rammed a police cruiser, severely injuring a Shaker Heights police officer as he got out of the vehicle.

The officer, Adam Flynt, is expected to live.

Mason was thrown off the bench after the vicious attack on his wife in 2014 that left her with a broken orbital bone that required reconstructive surgery.

Investigators said Mason punched Fraser Mason 20 times and slammed her head against the dashboard of his car five times, while the couple’s children were in the back of the car. Mason, who previously served in the state legislature, was a sitting Cuyahoga County judge when the attack took place.

After his 2014 arrest, police found a large arsenal of weapons and ammunition in his home.

Mason served nine months of a two-year prison sentence and went to work as a minority business development director for the mayor of Cleveland’s office after his release. He was fired after his arrest on Saturday.

Fraser Mason filed for divorce two days after the attack. The divorce case was still pending at the time of her death.  She also won a $150,000 judgement in a civil case against her ex-husband.

As part of his petition for release, Mason penned a letter to Fraser Mason saying he “failed as a husband, father, and a man,” and promised that once he realized he was “broken” he became a better father and man.”

“My responsibility was to love and protect you,” Mason’s letter said. “Instead of loving, protecting and providing for you and our daughters, I have provided a terrible example, and exposed you to rage and violence.”