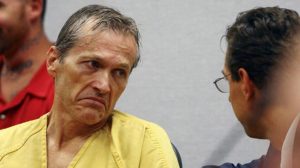 Martin MacNeill was serving life in prison for killing his wife

DRAPER, Utah — A Utah doctor serving life in prison for drugging and drowning his fashion model wife in a bathtub died mysteriously in jail, officials said.

Martin Joseph MacNeill, 61, was found unresponsive on Sunday near an outdoor greenhouse facility at the Utah State Prison in Draper.  Corrections department officials said there were no signs of foul play.

“The death is being investigated to determine the exact cause, and there are no obvious signs of foul play,” the department said in a statement.

But MacNeill’s lawyer said he suspected he had committed suicide.

“It’s something that I feared ever since he was convicted,” attorney Randy Spencer told the Salt Lake Tribune. “He’s tried to take his life before, unsuccessfully.”

MacNeill was serving a 15-years-to-life term in prison for the death of his wife Michele in 2007. A former Mormon bishop, he was convicted in 2013 of first-degree murder and wasn’t eligible for parole until 2052, when he would have been 96 years old.

His death came just a month his bid for a new trial had been rejected by an appellate court.

MacNeill’s 50-year-old wife, Michelle, who was recovering from cosmetic surgery just days earlier, was found unconscious in her bathtub by her then-6-year-old daughter. She  was taken to a hospital, where she was pronounced dead.

Prosecutors convinced the jury that MacNeill had given his wife a fatal mix of prescription drugs and then held her head under the water so he could continue carrying on an affair with Gypsy Willis, a woman he later hired as nanny to his younger daughters following his wife’s death.

He was also convicted of sexually abusing one of his daughters.

A month after he was convicted, MacNeill attempted suicide while awaiting sentencing, but lived.