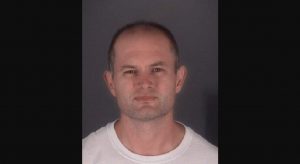 A Florida man was busted for trying to steal a car from a jail parking lot, just after he had been released on auto theft charges, police said.

Klaid Karpuzi, 41, was foiled the second time around because the car he chose to steal had an off-duty deputy sitting inside, the Pasco County Sheriff’s office said.

Karpuzi wasn’t free for long as the deputy marched him back inside the Land O’ Lakes Detention Center, where he now faces a second charge of attempted auto theft, the Tampa Bay Times reported.

Karpuzi was first arrested last Sunday after he stole a vehicle, cops said. He was released last Tuesday on $5,000 bail and that’s when things took a ridiculous turn.

The off-duty deputy, who was sitting inside a parked car outside the jail, saw Karpuzi walk around her vehicle and pull on the passenger-side door handle.

That’s when she got out and identified herself as a deputy and escorted Karpuzi back to jail.

Karpuzi told deputies that he saw a vehicle with the engine on and thought there was no one inside.

Karpuzi was released again Wednesday morning on another $5,000 bail, this time without incident.