The driver narrowly survived being ejected from the vehicle

FLORENCE, South Carolina — A woman who led police on a lengthy high-speed chase, miraculously escaped with her life when she was ejected onto the road after her SUV flipped over.

The episode unfolded on July 12, when South Carolina cops attempted to pull Jeffords over for a traffic violation. As it turned out, Jeffords had a bench warrant for failure to appear in court for armed robbery charges and her license had been suspended for an earlier DUI, so she refused to stop.

She eventually pulled into a parking lot, where a passenger got out and was arrested, but as cops slapped cuffs on the man, Jeffords sped off, sparking the long chase. The man told cops Jeffords ran because she didn’t want to go back to jail.

Eventually cops were able to bring the chase to an end when they used a maneuver to hit the back of Jeffords’ vehicle, causing it to spin out. But instead, she lost control and flipped over.

As the car tumbled wildly out of control, Jeffords can be seen being thrown out of the vehicle. 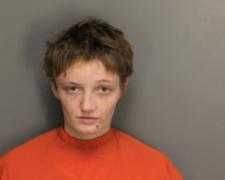 Miraculously she survived and remains in jail on charges of fleeing police as well as the charges from her earlier cases.