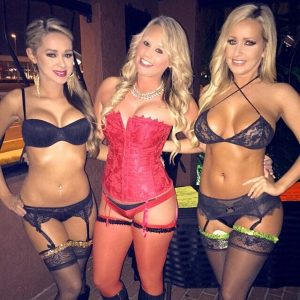 ORLANDO, Florida — There is such a thing as having too much fun.

Florida state troopers are hunting for man who ran over his own leg with his truck after stumbling blind drunk out of a strip club.

Authorities say the 28-year-old was leaving the Dancers Royale strip club around 2:15 a.m. when he somehow fell out of his Ford pickup as he pulled away and got his leg caught under one of the wheels.

The truck kept going and crashed into a nearby home, knocking 58-year-old Barbara Hernandez out of bed, while the driver ran off into the night. She was taken to the hospital with minor injuries.

“I’m really angry because he could have killed my mom and he left. He didn’t even take responsibility for it,”  Hernandez’s son, Adrian Larrea told WFTV-9.

Cops said the driver’s friends at the club said he was heavily intoxicated and they begged him not to drive but he didn’t listen to them.

The man left his ID in the car, so police say they are pretty sure they know who he is and will track him down eventually.