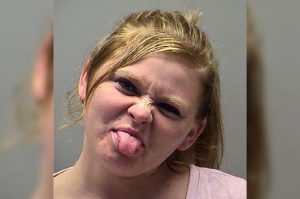 HUBER HEIGHTS, Ohio — Take your law and shove it.

That’s the attitude Amber Legge had on display when she was arrested in Ohio for allegedly threatening to burn a woman’s house down and driving drunk.

Legge, 32, had gotten into a fight with the owner of a Huber Heights home after going there at 3:15 a.m. Friday to demand money she believed she was owed.

“(The victim) indicated that Legge then returned to her residence…began calling her a ‘dope friend’, threatened to beat her, burn her house down, and contact Children’s Services,” the police report read, according to the Dayton Daily News.

As police arrived at the scene, Legge took off, but was pulled over later when officers determined she was under the influence.