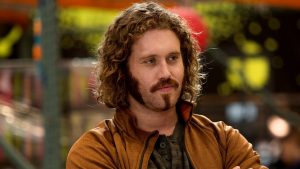 T.J. Miller was allegedly dead drunk when he called in the fake bomb threat

NEW HAVEN, Connecticut — T.J. Miller, the former star of the HBO series “Silicon Valley” has been busted for a bizarre episode in which he drunkenly phoned in a fake bomb threat on an Amtrak train, authorities said.

Miller, 36, was picked up late Monday at New York’s La Guardia Airport as he returned from a comedy gig in Canada. He was then taken to New Haven, Connecticut to be arraigned and was released on $100,000 bond.

Miller allegedly called 911 in New Jersey on March 18, claiming to be on Amtrak Train 2256 which was steaming from Washington, DC to New York City, and that there was a woman aboard who had “a bomb in her bag,” federal prosecutors said.

He described her as having brown hair and wearing a scarf.

By the time Amtrak authorities were made aware of the call, the train had entered Connecticut, where it was stopped and searched.  No bomb was found.

Investigators then reached out to Miller again, and this time he told them the woman had red hair and red scarf and had a “black carry-on suitcase with a handle.” He said she kept  checking the bag and asking the first class conductor what the next stop was and that she seemed anxious to get off the train and leave the bag behind.

The investigator noted that Miller was slurring his words and asked if he had been drinking. Miller said he had had a glass of red wine. He also dismissed questions about whether he had ever suffered from mental illness, stating, “This is the first time I’ve ever made a call like this before. I am worried for everyone on that train. Someone has to check that lady out.”

Investigators eventually determined that Miller had actually been aboard Amtrak Train 2258, not 2256, so that train was stopped and searched and nothing was found. The first class attendant on that train told investigators that Miller had appeared drunk when he boarded the train, had several drinks along the way and was then thrown off the train in New York due to being heavily intoxicated.

Turns out, Miller had gotten into an argument with a woman riding in the first class car, and prosecutors allege that Miller had phoned in the threat as an act of revenge against her.

In 2017, Miller acrimoniously left the hit HBO series after its fourth season, later leveling insults against the show’s producers in an interview. The producers later shot back, accusing Miller of being unreliable on set and frequently showing up intoxicated.