You are here: Home / Dumb + Dumberer / Facial Tattoos Likely to Be Dead Giveaway for This Fugitive 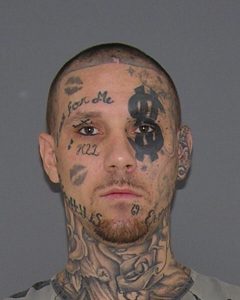 CINCINNATI — Well, he shouldn’t be too hard to find.

Police in Cincinnati are looking for a man with rather distinctive tattoos covering his face, including a dollar sign over his left eye.

Michael Mann, 34, is wanted on aggravated burglary and domestic violence after allegedly climbing into an unlocked window of his ex-girlfriend’s house on Jan. 9 and choking and slapping her several times. Cops say the victim has a child with Mann.

Mann is described as 6-foot-3 inches and 185 pounds. Cops say he has a history of domestic violence, aggravated robbery and drug charges.