You are here: Home / Creepy / Wait, what? / Famed Italian Gigolo Who Slept With 6,000 Women, Dies Having Sex 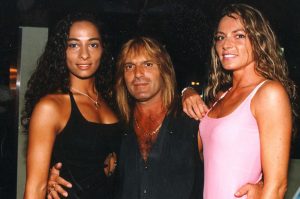 Zanfanti, known as the ‘Romeo of Rimini,’ claimed he bedded 200 women every summer in his prime

RIMINI, Italy  — A legendary Italian lothario known as the “Romeo of Rimini,” who laid claim to having bedded more than 6,000 women, died while in the throes of passion with a 23-year-old tourist in the backseat of a car. Maurizio Zanfanti was 63.

Zanfanti began his run as the reigning playboy of the coastal resort of Rimini when he was just 17 and working as a nightclub promoter charged with luring mainly German and Scandinavian female tourists into a club called Blow Up.

With his flowing locks, olive skin and ample chest hair, he had great success convincing the women to come to bed with him as well. In his prime, he boasted that he would often sleep with 200 women every summer.

In the winter, he would would travel to Scandinavia to work for tourist agencies. His exploits became so famous that some of his lovers erected a wax statue of him in a Swedish town.

His success with women led to him becoming the subject of numerous media profile. In 1986, Italian newspaper L’Espresso named him: “Italy’s most successful lover.” He claimed to have once seduced a French journalist who was interviewing him.

In 2016, he was a guest of honor at a Rimini nightclub at a reunion of Swedish women who had visited in the 1980s.

In an interview with German newspaper Bild in 2014, he announced his retirement and said: “At 59, I’m getting too old for it.”

But on Tuesday, he was “entertaining” a tourist from Romania in the backseat of a car, when he had a fatal heart attack.

The woman called paramedics, but Zanfanti could not be revived.

Local media said it was the way the man once called “Italy’s most successful lover” would have wanted to go. The mayor of Rimini said Italy had lost “a legend of the night.”