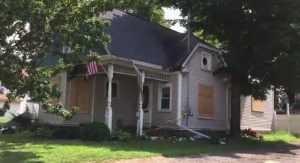 Jason Stokes is accused of setting his own home on frie

ENDICOTT, New York — An upstate New York firefighter has been charged with setting his own home on fire in a blaze his family blamed on politically-driven vandals targeting the “Blue Lives Matters” flag they had hung outside.

Jason Stokes, 41, was charged with arson for the August 10 blaze that attracted national attention because his family discovered the message,  “Lie with pigs, fry like bacon,” scrawled on the siding outside their Endicott home.

Stokes had been an Endicott firefighter since 2005

One family member told a local television station that they believed the home had been targeted because they had a pro-cop “Blue Lives Matters” flag outside next to an American flag. The pro-law enforcement symbol is a response to the “Black Lives Matter” movement which seeks to end police brutality against black people.

But after a lengthy investigation, the New York State police determined that Stokes was responsible for setting the fire. No one was hurt in the fire.

Stokes has been an Endicott firefighter since 2005.

“We knew fairly soon into the investigation that he was a suspect, but that’s not uncommon in any fire,” Endicott Fire Chief Joseph Griswold told Time Warner Cable News. “You always have to look at the people who live there.”

Broome County District Attorney Steve Cornwell said he believes Stokes wrote the anti-police message himself as part of a plan to cover-up his crime.

“That statement to me is absolutely despicable,” Cornwell told WBNG-TV. “It fuels a false narrative when it comes to the work that police officers do.”