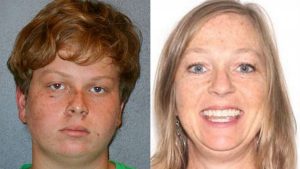 Gregory Ramos admitted killing his mom, Gail Cleavenger, over a bad grade he got at school

DeBARY, Florida — A 15-year-old Florida boy admitted strangling his mother and burying her body behind a church after arguing with her over a bad grade at school.

Gregory Logan Ramos had tried to cover up for the crime by staging a burglary at his family’s home and reporting his mother missing, but his story quickly unravelled, police said.

“He went to school, left school early, which is where his story began to fall apart,” Volusia County Sheriff Michael Chitwood said.

Ramos told police that he and his mother, Gail Clevenger, 46, got into an argument late Thursday over a D he got in school. His father was away on business in Seattle at the time, cops said.

After his mother went to sleep, cops say he went into her room and strangled her to death. He then put her body in a wheelbarrow, loaded her into her van and drove her to the nearby River City Church and buried her body beneath a fire pit.

He then enlisted the help of two high school pals, Dylan Ceglarek and Brian Porras, both 17, to ransack his home to make it look like a robbery had occurred.

“He then made what he described as ‘Grammy-winning’ phone call to 911 to report an incident which did not occur,” Chitwood said.

Ceglarek and Porras were both arrested and face criminal charges.

Ramos told cops that he had come from school to find the house a wreck, with computer, a Playstation 4 and rifle having been stolen. He also said his mother was missing and her van was left running in the driveway.

But under questioning, Ramos confessed to murdering his mother. Investigators later recovered the supposedly stolen property, as well as a shovel and broom Ramos used to bury Cleavenger and straighten up the scene around the fire pit.

Her body was later dug up from beneath the pit. Ramos faces first-degree murder charges, Chitwood said.