You are here: Home / California / Fraudster Doc Who Faked His Own Death to Avoid Jail Finally Faces the Music 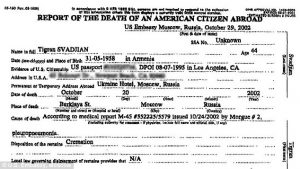 Svadjian paid $200 or this phony death certificate in Russia

LOS ANGELES — A doctor who went on the lam 15 years ago to avoid being tried for fraud and then bribed police in Russia to help him fake his own death, has been sentenced to 2 ½ years for fleeing justice.

Tigran Svadjian, a 58-year-old naturalized U.S. citizen originally from Armenia who worked as a doctor in Los Angeles and Fresno, had agreed to plead guilty in 2002 to stealing $2.4 million from Medi-Cal by billing for tests he never performed on patients who were dead.

But Svadjian fled to Russia just before he was due in court, leaving his wife and son behind, federal prosecutors said.

Later that year, the U.S. Embassy in Moscow received notification that Svadjian had died of pneumonia and that his body had been cremated. The embassy then issued a death certificate which Svadjian’s lawyers presented to prosecutors.

Svadjian later admitted he had paid a Russian cop $200 in 2002 to submit a phony official report about his death to the embassy. Svadjian then obtained a fraudulent Russian passport in a different name, Vasily Petrosov, and relocated to Hurghada, Egypt, where he worked as a scuba instructor, remarried and had two kids.

In 2013, after years of trying to get further confirmation of Svadjian’s death, prosecutors dismissed the health care fraud case.

But late last year, Svadjian was arrested in Egypt after being deported by Ukrainian authorities when he tried to enter the country on a fake Lithuanian passport. When Egyptian authorities searched his home, they found an old U.S. passport with his true name.

In a sentencing memorandum, prosecutors said Svadjian “did not simply flee from prosecution.”

“Instead, defendant planned and implemented a sophisticated, fraudulent scheme that involved bribing foreign officials, using false statements to mislead U.S. State Department officials into creating a false death certificate, and submitting that false certificate to federal prosecutors. Defendant then hid from U.S. authorities through the use of false identities for approximately 15 years. He abandoned his wife, son, and parents, and started a whole new life without them because he did not want to spend time in prison.”

But since the initial fraud case had been dismissed, the evidence against Svadjian had been destroyed and prosecutors were only able to charge him with fleeing prosecution.

“Did the defendant get away with his scheme? Yes, Mr. Svadjian, to a degree you were successful,” Judge Michael Fitzgerald said, according to the Los Angeles Times. “You deserve 60 months