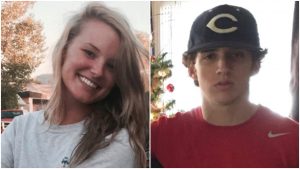 TEGA CAY, South Carolina — How about a round of indecent exposure?

A randy South Carolina couple was busted after getting caught having hardc-ore sex in the middle of the fairway at a tony golf course, police said.

Officers were dispatched to the Tega Cay Golf Club early Sunday evening after receiving a call that witnesses had spotted a man and woman “having intercourse at hole #8,” the police report stated.

The witness said that when he first spotted the couple on the fairway, he “thought that someone was possibly having a medical issue,” the Fort Mill Times reported. But when he looked through a pair of binoculars, he “saw the male with his head between the female’s legs.”

Two other witnesses told cops they thought they were looking at ”a deer laying down in the fairway,”  but, “upon closer inspection, they realized it was two people having ‘doggy-style’ intercourse.”

When an officer arrived, he spotted a “male with no shorts on and a female that appeared to only have a bra on.” The woman, the report stated, “was on her back and the male was laying down with his head between her legs performing oral sex.”

Police quickly ordered the couple, identified as Dakota Payne, 19, and Kiernan Hennessey, 24, to get dressed and charged them with indecent exposure.

Hennessey reportedly stated that she and Payne “should not have been engaged in those activities within public view.”