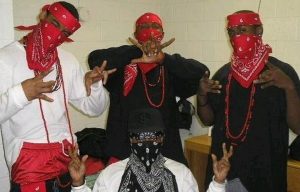 The attackers were members of M.O.B. 662, a Bloods gang affiliate in Michigan

FLINT, Michigan — Four ruthless gang members have been charged with brutally beating a 15-year-old boy and carving their crew’s name on his chest with a knife, prosecutors said.

The assault occurred last November, when the four members of M.O.B. 662 — a local affiliate of the notorious Bloods — spotted the teen selling marijuana in Genesee Township, Michigan. They then assaulted the boy, robbed him and carved their crew’s name into his chest, federal prosecutors said.

“This case is a stark reminder that the influence of violent street gangs extends beyond the big cities and into smaller communities such as our own,” said Genesee County Prosecutor David Leyton.

Doniel “Dee Red” Heard of Canton, Talasha Willis of Flint, Kimberly “Boss Lady” Perryman of Mt. Morris, and Alina White of Waterford are each charged with a count of assault with a dangerous weapon in aid of racketeering, and a count of interference with commerce by robbery.

Prosecutors say the gang members committed the vicious attack in order to “gain entrance to, maintain, and increase their positions in the gang.”