You are here: Home / Dumb + Dumberer / Grinch Stabs Frosty in Not So Merry Christmas Attack 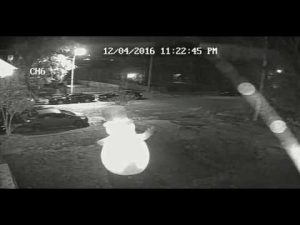 Cameras caught the assault on Frosty by a vandal

ST. LOUIS — The war on Christmas is real!

A late-night grinch ran into a Missouri man’s yard and maliciously stabbed an inflatable Frosty the Snowman yard ornament and the whole brutal assault was caught on tape.

Jeff Diggs says he was horrified to find Frosty severally wounded in what he said looked like a “mob hit style assault” just weeks before Christmas. Diggs’ security camera footage shows Frosty sink slowly to the ground as the air escapes out through the wound.

The footage shows a white male, possibly in his 20s, with a bandana covering his face, hop out of the passenger side of an older model dark colored two-door small size pickup truck,” before shanking the lawn ornament on its right side.

“Frosty received a total of 9 stitches from the stabbing. He is doing well and recovering from his injury,” Diggs wrote on a Go Fund Me page he set up to raise cash to a local children’s charity in Frosty’s honor.

“He insisted on going back to work immediately because he believes in the magic of the holiday season and hopes that all people will come together and learn to love and respect each other regardless of our differences!” Diggs wrote.