You are here: Home / Creepy / Grisly Cell Phone Pics Uncover Cannibal Couple Behind Up to 30 Deaths in Russia 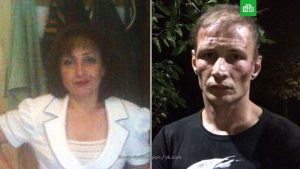 KRASNODAR, Russia — A husband and wife have admitted to a having killed and eaten the remains of up to 30 victims over the past two decades in a shocking spree of cannibalism in provincial Russia, police said.

The blood-thirsty couple were finally caught after the husband lost a cell phone containing pictures of him posing with the severed head of one victim and holding a human hand in his mouth, authorities said.

When maintenance workers found the cracked Samsung cell phone outside a military aviation university in the southern city of Krasnodar on Sept. 11, they immediately contacted police after seeing the pictures on it, the Russian news outlet, Mash, reported.

Cops were able to race the phone to 35-year-old Dmitry Baksheev, who lived near where the phone was found with his wife Natalia, 42,  a nurse at the school, police said.

When confronted, Baksheev calmly admitted having posed for the grisly photos, but insisted he had simply found the body parts and decided to ham it up for the camera with them, police said.

But the interrogation soon took a macabre turn, when he and his wife admitted having a taste for human flesh, and to having killed and eaten dozens of people dating back to 1999. They said they couldn’t remember exactly how many people they had killed but estimated it was as many as 30.

They later admitted having killed the woman in the photo after meeting her in the street and drinking heavily with her.

A further search of the couple’s home revealed eight jars containing what appeared to be human remains pickled in a kind of brine. Skin which appeared to have been  taken from as many as 19 people, was also discovered in the home.

So far, police say they have not confirmed the couple’s accounts of the earlier deaths aside from the woman whose photos were found on the phone, but they are continuing to investigate.