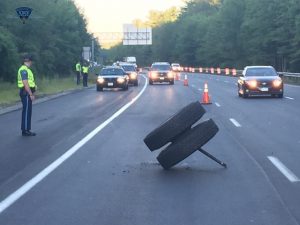 A state police officer narrowly missed a grisly fate when a pair of wheels came off a passing tractor-trailer, crushing the rear end of his patrol car.

Police say the officer was parked in a constructions zone early Monday morning, when the truck came roaring by and left behind a pair of wheels that snapped off from the tractor. 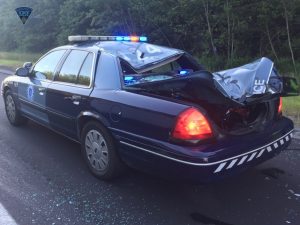 Officials say the truck did not stop, and investigators are trying to figure out who was behind the wheel. They are asking anyone who may have seen a truck driving along I-84 missing an entire set of wheels, to call the Massachusetts State Police.