You are here: Home / Heroes / Hero Driver Leaps into Action to Save Motorist Having Seizure 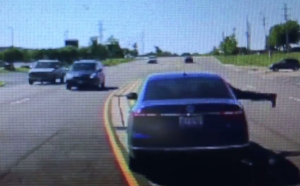 DIXON, Illinois — A hero driver was caught on tape leaping into action to save a fellow motorist having a seizure behind the wheel from a nasty accident at a busy Illinois intersection.

Police say the terrifying episode unfolded late in the afternoon last Friday when the stricken driver ran a red light and began drifting into oncoming traffic in downtown Dixon.

That’s when Randy Tompkins, who was sitting behind the wheel of his pickup truck with his wife beside him in the opposite lane, sprang into action, with the whole thing being captured on the dashboard camera of a nearby police car.

At approximately 4:06 p.m. yesterday afternoon, one of our squad cars was on routine patrol approaching the intersection of 4th Avenue and North Galena Avenue.

Officers observed a blue passenger car traveling north on North Galena Avenue and had disobeyed the red traffic signal at that intersection. The car proceeded through the intersection, almost striking several vehicles. Our squad car activated its emergency lights in an attempt to conduct a traffic stop on the car. The car proceeded north at a low rate of speed and began traveling into the oncoming lanes of travel.

Tompkins and the two officers stood by until Dixon City Fire arrived and transported the driver to KSB Hospital. We want to thank Tompkins for his heroism and for coming to a complete stranger’s aid!
#DixonProud

First, Tompkins backed his vehicle up and out of the way of the oncoming motorist and then raced out of his car and dove headlong through the passenger window of the sick driver’s car and pulled the parking brake.

“I saw him come out from behind the traffic, and he almost hit me in my lane,” the 39-year-old Tompkins told the Northwest Herald. “I knew something was wrong, but I didn’t realize he was having a seizure until he got to the intersection.”

The quick-thinking Tompkins said it all happened in a blur, but that he “just did what had to be done”.

“He was in danger himself, and he was a danger to others,” Tompkins said. “My adrenaline was pumping, and I just reacted.”

Police say the driver, who was described as a man in his 20s or 30s, had indeed had a seizure and was taken to a local hospital and later released.

“We want to thank Tompkins for his heroism and for coming to a complete stranger’s aid!” the Dixon Police wrote on Facebook.