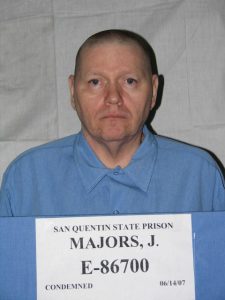 SAN QUENTIN, California — He beat them to the punch.

A death row inmate in California has died, but not at the hands of the state.

James David Majors, 69, who had been on death row since 1991,  was pronounced dead Thursday morning at a hospital near San Quentin State Prison, the California Department of Correction announced.

The cause of death was being investigated.

Majors was sentenced to die by a Sacramento County jury for the gangland drug slayings of Thomas Probst, Jeanine Copeland and Patrick Mungavin in Fair oaks in 1989

Authorities had charged Majors and his accomplice, Robert Reese, of traveling to California from Arizona to buy a pound of methamphetamine from the three victims. Once inside the home, the men shot and killed the victims and stole cash, drugs and jewelry from a safe.

The victims were later discovered by Copeland’s 8-year-old son.

A month after the killings, Reese was found shot to death in Arizona. A Phoenix restaurant owner and crime syndicate member, Giuseppe “Joe” Calo, pleaded guilty in 1992 to the murders of Reese and six others. He told authorities that Majors had been the hitman in all seven killings, at the orders of local drug dealers, although he was never charged.

Corrections officials say that of the 888 people sentenced to die in California since the death penalty was reinstated there in 1978, 71 have died of natural causes. Another 25 have committed suicide and eight died of other causes. The cause of death in two cases, including Majors’, remains pending.

In total, California has executed 13 condemned inmates since 1978, while two other were executed in other states.