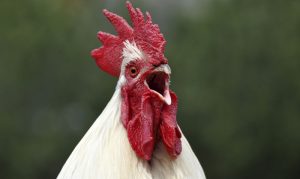 BRIDGEPORT, Connecticut — That is just creepy.

Officials in a Connecticut courthouse made a grisly discovery when they found the bodies of two decapitated chickens hidden away inside a courtroom.

The marshals and maintenance staff in the state courthouse in Bridgeport made the horrifying discovery on Wednesday in the public seating area of a courtroom after detecting a putrid smell, the Connecticut Post reported.

Officials say the carcasses were covered in silver, green and gold glitter.

It’s not clear how the chickens got there and an investigation is underway.

State court officials told the paper that headless chickens had been found in the past outside of courtroom buildings but never inside.

Decapitated chickens are sometimes used in Santeria, an Afro-Caribbean religion, to protect a person from being found guilty of a crime, the paper reported.