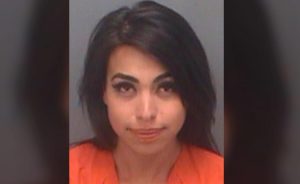 CLEARWATER, Florida — A smoking hot Instagram model was arrested for allegedly attacking police in the buff after they tried to get her to leave a Florida hotel where she had been causing a disturbance.

Brissa Dominguez-Garcia, 25, is accused of kicking several officers and trying to bite and spit on others as they attempted to escort out of the Edge Hotel in Clearwater early last Wednesday.

According to the police report, when officers arrived on the scene after receiving a call from the night manager, they found Dominguez to be totally nude. An officer offered her a towel to cover up, but she used it instead to whip him in the face, the report said.

She then kicked three patrolmen, and attempted to bite and spit on one officer, who she then “mule kicked” when he got too close, Clearwater police said.

The 5-foot-4, 130-pound Dominguez hails from Mexico and gave police a home address in California. She has amassed 74,000 followers on her Instagram page where she regularly posts photos from around the world highlighting her ample derriere and curvaceous figure.

At the same time she was arrested , Clearwater cops also  took in a 25-year-old Florida man who was stumbling around naked in the hotel’s lobby. It is unclear if or how the man–who was “uncooperative and intoxicated”–was connected to Dominguez.