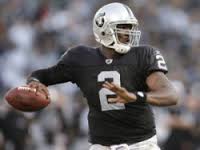 One-time No. 1 pick, JaMarcus Russell, was one of the NFL stars bilked

GREENSBORO, North Carolina — A businessman who served as a money manager for several NFL player pleaded guilty to bilking them out of $2.9 million.

Michael Rowan, 46, of Greensboro, N. Carolina, recruited players as they came out of college to hire him and his partners in Capital Management Wealth Advisors and APS Management to manage their money.

Federal prosecutors say that once a player was drafted by the NFL, Rowan would enter into an agreement to provide them financial services for a fee of between $15,000 and $50,000 a year. He would then have them sign an agreement allowing him access to their bank accounts to make investments for them.

While he told his clients he would only make transactions they authorized, prosecutors say Rowan transferred over $2.9 million for his own accounts and without their knowledge.

The shady investment advisor also pleaded guilty to not paying taxes on the purloined cash between 2009 and 2013.

Rowan was sued in 2010 by former San Diego Chargers wide receiver Craig “Buster” Davis, who claims he was bilked out of $500,000 in a bogus investment.

He faces up to 20 years in prison when he is sentenced in January.