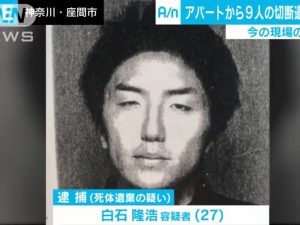 ZAMA, Japan — It was a real house of horrors.

An alleged serial killer in Japan who stored the dismembered remains of nine people in his tiny one-room apartment, told cops he kept the bodies because he was afraid he’d be caught if he tried to dispose of them.

Cops were led to 27-year-old Takahiro Shiraishi’s apartment in the city of Zama while hunting for a 23-year-old woman who had disappeared. There they made the grisly discovery of severed heads, body parts and hundreds of bones stashes in cooler boxes all over the apartment.

“I couldn’t throw away (the bodies) out of fear for being caught,” police quoted Shiraishi as saying, according to the Kyodo News.

Shiraishi admitted to cops that he had lured the victims — mostly young women in their teens or early 20s — to hs apartment after meeting them on Twitter. Some he sexually assaulted before killing them and at least one he stole $4,500 from, police said.

Some of the women had expressed suicidal thoughts and Shiraishi had convinced them he could help.

One of the victims was a man who Shiraishi said was the boyfriend of one of his female victims who had come looking for her. Shiraishi killed him to stop him from reporting his girlfriend as missing, police said.

Police say they believe the victims were all killed within a two month period after Shiraishi moved into the apartment in August. Investigators say he packed some of the remains in boxes of kitty litter to help obscure the smell.

Shiraishi told cops it initially took him three days to fully dismember a body, but after a few victims, he was able to do it within a day, police said.