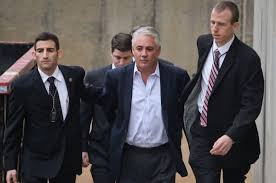 James Burke pleaded guilty in February to civil rights violations in the brutal jailhouse beating and to conspiring with other officers to cover it up.

The 52-year-old Burke had recently taken the job as the top cop of the department in 2012 when probation officers arrested heroin addict Christopher Loeb on a probation violation and found a cache of stolen goods stolen from over a dozen vehicles in his home.

After recovering the bag, Burke drove to the stationhouse where Loeb was being interrogated, barged into the interview room and began punching and kicking the handcuffed suspect who he called a “pervert.”

When federal prosecutors opened a probe the following year, Burke pressured detectives under his command to lie about his role in the assault. But at the same time, prosecutors say Burke bragged about the beating to other cops.

“Burke regaled a group of officers with his account of the assault, saying it reminded him of his ‘old days’ as a young police officer and referred to the detectives who were present at the assault of a defenseless prisoner as his ‘palace guards,’” prosecutors wrote in a filing earlier in the case.

For three years the cover-up worked, but in 2015, the FBI managed to get a handful of officers to testify about what had really happened and Burke’s defense unraveled.

He has been jailed since his arrest in December 2015.